The OpenAPI specification defines a standard, programming language-agnostic interface to RESTful APIs over HTTP(S) which allows humans and computers to discover and understand service capabilities without access to a service’s source code or documentation. OpenAPI is used

APIs are described in a so-called OpenAPI document containing all features required to actually access the API, such as:

The OpenAPI Document itself is a single JSON object which may be serialized either in JSON or YAML format (see the diagrams below for its overall structure and an example). OpenAPI allows for any type of request or response payload which can be specified according to RFC 6838 such as:

JSON is the most prevalent payload type due to the wide ecosystem support (tooling, documentation, best practices, tutorials). Additionally, OpenAPI allows the use of (a subset of) the JSON Schema specification to declare the syntax of requests and responses (e.g., which fields are mandatory or optional, data types of the fields etc.). 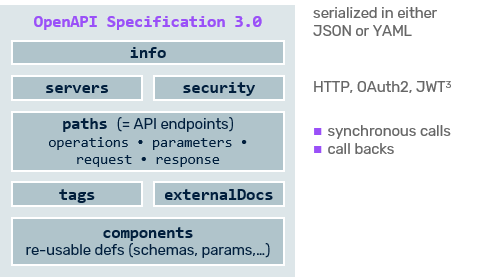 The following diagram contains a fairly simple example. More elaborate examples can be found on GitHub. 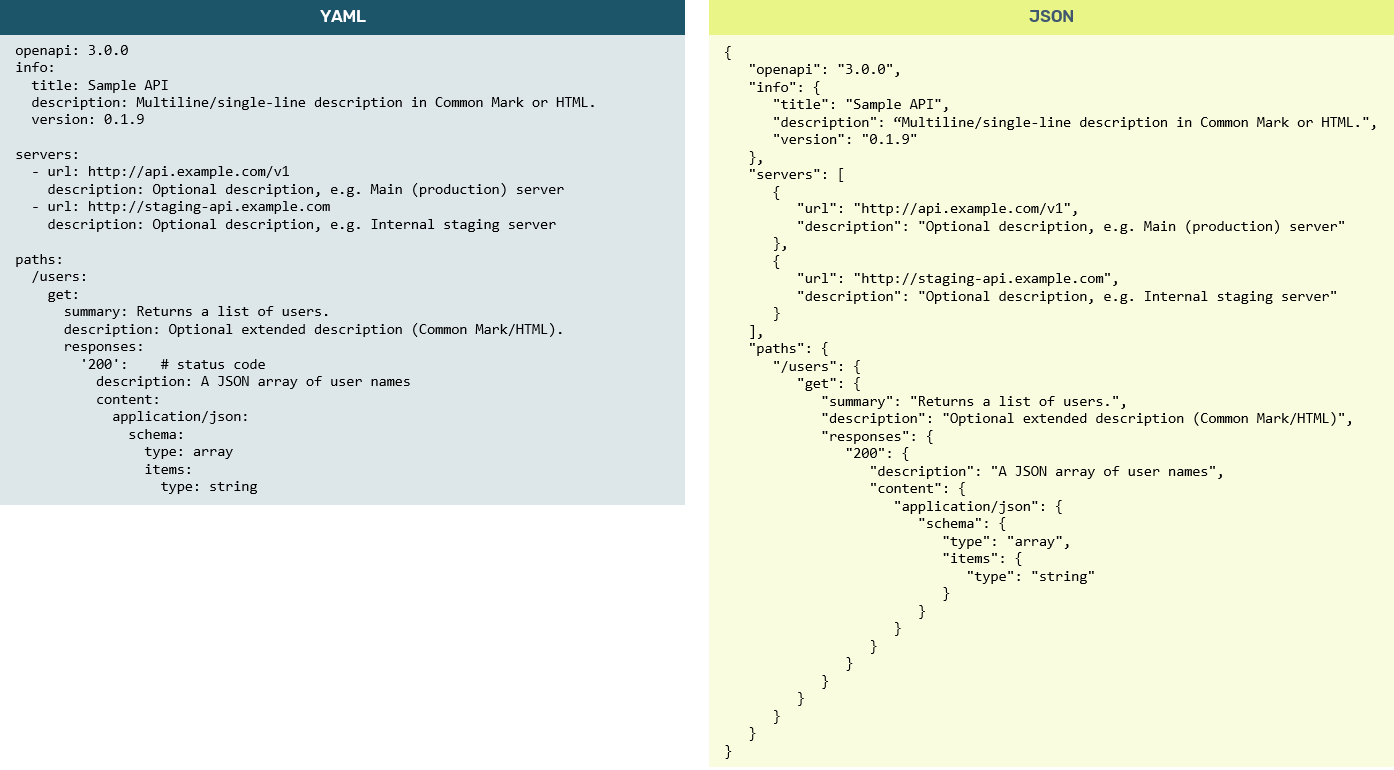 OpenAPI started out as open source specification for designing REST APIs in 2010 as “Swagger”. In 2015, Swagger (2.0) was donated to the Linux Foundation, renamed to OpenAPI, and is now being maintained by the OpenAPI Initiative. It is a very comprehensive and rich standard for (syntactically) describing APIs albeit limited to RESTful APIs over HTTP(S). It can describe most of the possible REST APIs (e.g., including callbacks), but a few types of REST APIs (very intricate combinations of request/responses and schemas) cannot be described. Based on the absent precipitation of this in the web this does not seem to be a practical hindrance, though.

It is supported by all major tools found in the full API lifecycle, see GitHub for examples.

OpenAPI will still increase in significance and will become the single most important generic REST API description standard in the mid-term. This is directly driven by the “Tsunami” of IaaS/PaaS/SaaS and cloud applications which are all being accessed thru appropriate APIs.

For certain narrower domains (e.g., querying and updating many data sources at once or interfacing with native graph databases), other richer standards might become more attractive, for instance:

This, however, will be the exception rather than the rule.